skip to main | skip to sidebar

Ebsco Business Database Advisory Board’s meeting moved out of Massachusetts.  The meeting was held in Portland, Maine.  The board stayed at the Portland Regency, a hotel just up the street from the wharf.  I arrived late Monday afternoon catching a hotel courtesy shuttle ride with Eve and Alicia.  Sometime after 3:00 I was checked in and changed for a long run.  Having done my Google Maps reconnaissance over the past week, I found some link trails that began pretty close to the wharf.  I didn’t need to meet the group for dinner until 7:00 for Dinner at Five Fifty Five.  On the ride in from the airport, I was able to view Back Bay Cove.  With plenty of time I ran the waterfront trail until it connected to the Back Bay Cove trail.  Having mile markers on the Back Bay Cove trail allowed me to check my pace.  For two of the 3.5 miles, I was at a steady 10:05 pace and probably maintained that for the entire 8 mile run.  Even before I made it back to the hotel, my body was reminding me that I hadn’t ran more than 3 miles for the past month.

Dinner was fine after I finally made it to the Five Fifty Five.  I had hope to arrive a bit early for dinner and quickly checked the itinerary for the 3 days.  Of course I misread which restaurant we were dining.  After a fifteen minute walk to the wrong restaurant, fifteen minute fast walk back to the hotel to find the correct name of the restaurant, and a walk a block, job a block 15 minutes jaunt to the correct place I arrived only 10 minutes late.

2 beers into appetizers I began to relax.  The beers was absorbed quickly as I hadn’t eaten lunch.  Pre and post run protein bars only kept me from an absolutely empty stomach.  Unfortunately, my dinner was not very good or maybe I was crashing from the long run.

A surprise from hotel was a workout room that allowed for a “real” weight workout.  The room included 5 or so cardio machine, an assortment of Cybex machines, and a free weight area including a Olympic bench setup.  I managed to do a full hour of chest/triceps while downing 4 cups of what I will call coffee water.

The all day meeting was engaging as normal.  During breakfast, Ken from Ebsco and I discussed Ebsco’s ebooks and what I am doing with ebrary.  Sounds like Ken and a colleague will be visiting Chicago to better understand what we are doing with ebooks and try to sway some of out business from ebrary.

During the meeting the weather has soured.  Prior to the meeting I invited Scott to go for a run during our stay in Portland.  We had decided the after the business meeting would be a good time.  I was so sore all day from overdoing the run the day before.  As the soreness increased I just wanted to go back to my room after the meeting and sleep.  But Dave got added to the discussion of running and there was no way to back out of the run.  Both were fine with backing the run down to 4.5 miles.  The temps were in the upper fifty’s with a steady rain.  My colleagues were pretty surprised that we were still going to run.  During the run I pretty much hung on right behind the 2 of them and my legs moved with the smoothness of concrete.  In spite of everything, I felt a level of achievement especially given the conditions.

Scott and I went out to eat a bit later.  Our first stop was a chowder house that seems to be filled with locals.  Nothing fancy here and I had a pumpkin ale along with a seafood chowder.  I didn’t care for the ale, but wanted to try it out since that is what Scott ordered.  Next stop was an Irish Pub that happened to have their homemade veggie burgers.  Scott has went with a vegan diet for 8 months or so (dropping 12 pounds along the way).  I decided to have a veggie burger along with Scott.  Abigail and I have veggie burgers at home pretty regularly.  The pub’s burger has a lot more flavor and was substantial in size.  Scott skipped the goat cheese staying vegan, but order 3 sides.  Given the run, he was hungry by the time we made it to the pub.

The tourist day was just the right mix.  After Blantiff’’s for breakfast, we ride a Narrow Gauge Railroad.  When running I had ran along the tracks.  I had hoped that the train ride would include crossing the bridge.  Well that didn’t happen.  The Conductor told us that the bridge had burned 10 years ago and wasn’t going to be repair.  Anyhow, she says, the track goes from narrow gauge to standard on the other side. 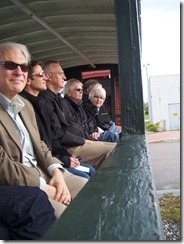 After the train ride,it was off to the Shipyard Brewery.  Having been on a couple of brewery tours in the past, the bar had been set pretty high by New Holland Brewery and Sam Adams. In Shipyards case, there was little in terms of a brewery tour.  The video explaining there process, tasting a couple of blends, only seemed to ultimately end in a large gift/souvenir shop. 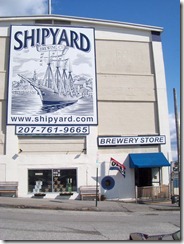 Capping off our tour agenda was a lunch on the restaurant boat DiMillo’s.  I had pretty reasonably, so I indulge in a bread pudding with bourbon sauce.  Osha is the master planning and made our whole time in Portland wonderful.  Osha’s bar is high and she never gives us a less than perfect experience in addition to the board meeting.